Meerut is a fast developing town of India and has been showing rapid growth in agricultural as well as industrial sectors. Its physical features albeit, the strategic location on the plains of Ganga and Yamuna have been instrumental in Meerut positioning on the global map. Well-developed transport infrastructure and great connectivity by all modes of transport are inevitable for the growth process. The Government, both Union and State Government, have been instrumental in developing the transport facilities both within and out of Meerut.

Modes of Transport in Meerut


All modes of transport namely, road, railways and airways (at a comfortable distance) connect the city of Meerut. Railway connection to the nearby cities and also with the rest of India is phenomenal. Meerut is a junction point for many of the regional and national highways. National and State Highways namely, Meerut-Bhagpat Road, Delhi-Rourkee Road, Meerut-Garh Road, Meerut Bijnor Road intersect at the outskirts at the city at Begum Bridge. A well-developed Regional Rapid Rail Transport is also in the process of development that helps easy connectivity with the capital city.

Meerut has excellent road connectivity and rail connectivity with the rest of the country. The nearest airport being Delhi is at a distance of 109 kilometers. Various projects by the Government are underway to improve the transport infrastructure of Meerut that aims at reducing traffic congestion, improving road standards, as well as development of Highways with the nearby cities and towns. 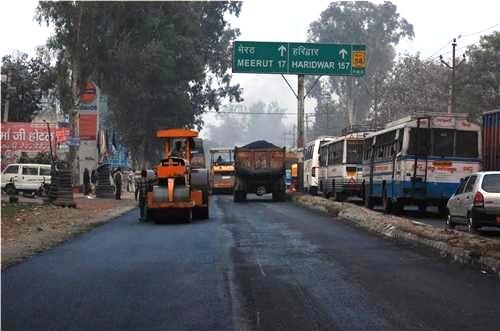 Meerut has well developed road transport with the neighboring cities of Delhi, Ghaziabad, Haridwar, etc. NH- 24, NH-58, NH-119, NH-235, pass through the city of Meerut. The Delhi Meerut 14-lane Highway is an ambitious plan undertaken by the respective government that aims to reduce the travel distance between the two cities. NH-24 is a 438 km stretch that connects Delhi with Lucknow passes through Dasna, Meerut, Moradabad, Sitapur among other cities. NH-58 built between Ghaziabad to Badrinath connects Meerut and Anand Vihar. NH-119 connects Meerut with Uttarakhand and NH- 235 connects Meerut with Bulandshahr and covers a total distance of 66 km.

The present Delhi-Meerut road on NH-58 is a high traffic route that causes traffic congestion, leading to heavy losses for manufacturers and transporters. The new highway connectivity on NH-24 is thus a welcome change where one can cover the total distance of 70 kilometers between Delhi and Meerut in barely 45 minutes.

Meerut’s closest airport is New Delhi and is located at a distance of 109 kilometers from a point to point. B.R. Ambedkar Airport of Meerut spread over 47 kilometers is presently is used for functional purposes only, such as refuelling, unloading, etc. After being shelved off a couple of times in the past couple of years, the state government has given the 'go ahead signal' for finalizing and carry on with the development of this airstrip into a full-fledged national airport.

Four railway stops at Partpur, Meerut Cantonment, Meerut city and Pabli Pas serves the city of Meerut. Meerut Station and Cantonment station are the main stations here. Meerut City Station is the busiest here and has nearly 65 trains passing through it daily. A total of 27 pairs of trains run to and fro from Meerut and New Delhi as an increased number of workforce travel between the two cities on the daily basis.

Buses and rickshaws are the best modes of transport within the cities. A number of government and private buses and tempos operate on the routes from Meerut to nearby towns and cities. Trains to nearby cities of Delhi, Ghaziabad, Haridwar are a popular mode of travel.

Buses, tempos, rickshaws and taxis, are the prominent modes of transport within the city and to the neighbouring towns. Intermittent bus stops at 18 locations, excellent bus service to every part of the city makes bus commutation the most reliable mode of transport. One can also find rickshaws, shared jeep, tempos that have a license to ply up to 16 kilometres from the city limits. Rickshaws have permit to operate only within the municipal corporation limits.

Trains to nearby cities such as Ghaziabad, New Delhi, Dehradun are available from Meerut City Station. Travel to Delhi takes approximately 1 Hour and 17 minutes, while travel to Ghaziabad takes approximately 30 minutes. More than 20,000 people commute to Delhi and other NCR areas for work on a the daily basis. Hence 27 pairs of trains run on the route between Meerut and Delhi.

Overview of Transport infrastructure in Meerut

The fast developing town like Meerut requires transport facilities in tune with the growth of the city. While traffic congestion is a common problem, the government is taking initiative in improving the transport infrastructure. Meerut’s own B.R. Ambedkar Airport is being developed as a national airport. The state government is also taking initiative in planning, financing and development of various spheres of road infrastructure as establishment of Transport nagar, etc. The 14-lane expressway between Delhi and Meerut hopes to reduce the distance to 45 minutes between the two cities, which will prove to be a boon for the daily commuters.