Meerut is known for its great history, culture and tradition, and is dotted with a number of historical places with deep rooted history and antiquity attached to it. The influence of the ancient city of Meerut has a sizeable population of Muslims, and has been the center for Mogul and Kamboh Muslims since time immemorial. Throughout the history a number of mosques, dargahs and maqbaras have been built, some of which date back to as early as 11th Century. Meerut is a home to a hundreds of such mosques and imambaras, some of which continue to be a place where the religious congregation, fairs continue to be held during festive period. Some others are, however, abandoned and lack any activity in the premises. Some of the popular mosques in Meerut are as follows: 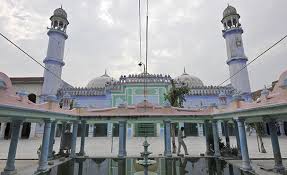 Jama Masjid is one of the oldest mosques in Meerut and was built by Hasan Mahmudi, a minister of Mahmood Ghaznavi, in 1019 AD and is well regarded as the first Masjid in North India and is also one of the oldest in the country. Since a number of Buddhist statuettes were found in the site during the digging, it is believed that the Jama Masjid was built on the site near the remains of the Buddhist temple. It is located in the Kotwali area of Meerut. The quadrangular structure has an open sky courtyard, the walls of the mosque have fine engravings and floral motifs. During the British rule, Muslims were called upon to be prepared for jihad against the British which would be initiated by Azad and Bari through the issue of fatwa. This episode took place where the Jama Masjid stands today, and hence played a role during the period of Indian struggle for Independence.

The tomb of Shahpeer or the Shahpeer's Dargah is one of the most popular dargahs in Meerut that was built by Noor Jahan in memory of a local Hazrat Shahpeer in 1620. He was the advisor and physician to Shah Jahan. This tomb was believed to be constructed within 24 hours of the death of Shahpeer, and hence parts of the structure are still incomplete. Having stood the test of time for over 450 years, this tomb is recognized as a heritage monument by the Archaeological Survey of India. It is located in the Suraj Kund area of Meerut and religious fair is held every year during the months of Ramzan.

This dargah was built by Qutub-ud-din Aibak in 1194. Annually, this place hosts Urs during the months of March, which co-incides with the Nauchandi Mela held close to this dargah. This site is located close to the Chandi Devi Mandir in the Surajkund area of Meerut.

Other mosques in Meerut