Meerut is the popular industrial and commercial city of India and is also popular for some world famous historical sites which are the reason, the city is a popular destination among the tourists from all over. Meerut is accessible by all modes of transport and is located at a comfortable distance from the National Capital New Delhi as well as the Uttar Pradesh's capital Lucknow. During the time of Ashokan period, Meerut was one of the 16 cities and hence, its history can be traced back to 273 BC.

Its proximity to places such as Haridwar, Hastinapur, Alamgirpur etc., makes Meerut the gateway to the past. Meerut Cantonment being one of the largest in India is popularly associated with India’s freedom struggle. Monuments, memorials and statues are a representation of the times of struggle for Independence and of a bygone era at large. The city has a number of parks and gardens, churches and temples and shopping areas which are well maintained too. Overall, tourism in Meerut is a pleasant experience and a memorable one too, as the city has innumerable tourist attractions that can be of interest to everyone.

Sardhana, located 15 kilometers from Meerut is a popular tourist destination renowned for its Basilica of Our Lady of Graces. Temples and churches present here have ancient roots; some temples that can be traced back to the days of Mahabharata. Basilica of Our Lady of Graces built during the early 19th Century by Begum Samru who once ruled Sardhana. The town is popular for the Mela that is held annually called the Boodha Babu Mela.

Meerut Cantonment is one of the largest Cantonment areas in India and is the oldest too. Built during the British East India Company in 1803, the cantonment in Meerut has many firsts to its credit. The Sepoy Mutiny had its initiation here. War sites, temples and churches, the well maintained gardens and parks, shopping area are among the places of tourist attraction in the Cantonment area. The war memorial that was built in memory of the soldiers. One can see the War memorials like Shaheed Smarak built in memory of the martyrs of the first war of Independence, Ashoka Pillar, statue of Mangal Pandey are some of the popular spots in Meerut Cantonment. Augarhnath temple or Kali Paltan, the St. John's Church, British bungalows known for their vivid style of architecture, Jama Masjid, etc. Gandhi Bagh is the garden maintained by the Cantonment of Meerut which is popular for the wide variety of flora, and good recreational facilities too.

Mustafa Castle was built by Nawab Mustafa Khan Shefta in loving memory and honour of his father, Nawab Shefta. The British imprisoned him for supporting the uprising of 1857, for which he was imprisoned in the jail which is present in the castle. This castle holds great historical as well as architectural significance. 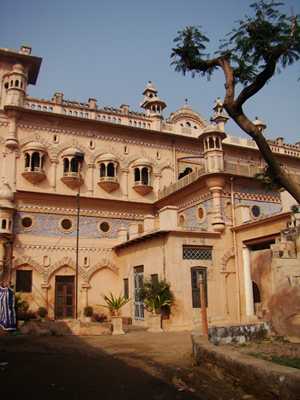 Parks and Gardens in Meerut

Meerut has a number of parks and gardens at various corners of the city. Suraj Kund Park is one of the popular ones here, the origin of which can be traced back to the period of Mahabharata. Bhama Shah Park, Ram Bagh, Ecological Park Cantonment Park are some of the parks frequented by the residents and is popular among tourists.

Meerut has temples all along the city that were built during the various times of history and during the present era. Temples of the ancient roots such as Augarnath Temple, old Chandi Devi Temple, Kali Paltan Temple, Shri Durga Temple, Ganesh Temple are among the popular ones in Meerut.

Most of the churches in Meerut bear ancient roots and have been built during the British period. While some of them, built during the British era are situated in the Cantonment and some in the city, others are under the governance of Meerut Diocese. St. John’s Church being the oldest among them is also the oldest in North India. Built in the Anglican Architecture in the early 1800's the architecture represented by lancet windows, high vaulted walls. Other churches in Meerut are St. Joseph’s Church, St. Thomas Church, Methodist Church, etc.

The Freedom Struggle Museum, located in the Cantonment of Meerut, is a living representation of the freedom struggle movement. Various objects, collectibles and art is on display that depict the various facets of the history of Meerut as well as the times of freedom movement in Meerut.

Garhmukhtheshwar is 50 km from Meerut and on the banks of the Ganges. The main four temples in Garhmukhteshwar are dedicated to Goddess Ganga, each of which having ancient roots. Other temples in this area other than the Ganga Temple are Meerabai ki Reti, Mukhteshwar Mahaev Temple and Nahoosh Koop.

Brij Ghat is located five kms from Garhmukhteshwar and is a popular religious and recreational spot. Amrit Parisar, Hanuman Mandir and Vedant Mandir are among the most frequented temples here.

Other Places of interest in Meerut

Meerut has a whole host of other sites and spots that are of interest to all tourists. Some of the popular ones among tourists include Mausoleum of Shahpir, Ghantaghar, Parikshitgarh, Modinagar, Jain Temple, Jama Masjid, etc.

Due to the proximity of Meerut to many an important towns and cities, one can find many options for quick getaways from the city of Meerut within a radius of 250 kilometers. Some among them are New Delhi, Haridwar, Aligarh, Agra, Baghpath city, Mathura, etc. Excellent connectivity by road and rail, good infrastructure, its central location etc., makes Meerut a popular tourist destination.