Meerut has played an important role in the history of India more particularly, during the First War of Indian Independence of 1857. The city bears memories of the ancient history through its number of monuments, forts, historical places. The Government Freedom Struggle Museum in Meerut is one of the popular places in Meerut for visitors who want to get a peek into the details of the War of Independence. Stamps, art and artifacts, paintings, murals, collectibles and memorabilia are preserved in good condition at this Government Museum. Located in the Cantonment area of Meerut, it was established in 1997. A number of educational tours and events are held at the Museum to educate young students and general public about the events and episodes that took place during the struggle for Indian Independence. 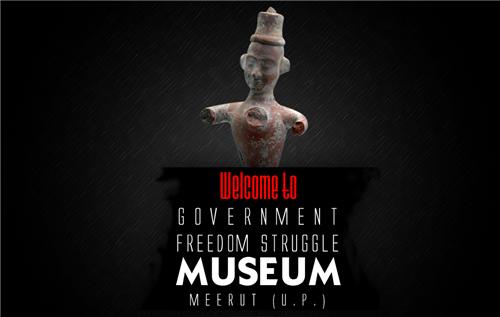 The Government Freedom Struggle Museum is located 6 kilometers from the Delhi Road within the compound of the Shaheed Stambh or Martyr's Memorial in the Meerut Cantonment area. The Museum was established with a motive of preserving the memories of the war and the dioramas of the events of the wartime. The objective as enumerated in the website of the Museum is "the preservation, documentation and exhibition of the cultural property and to make it available for educational activities as well as the awareness of the glorious past". The paintings of the national leaders such as Tantia Tope and Nana Saheb adorn the walls of the Museum.

The Museum has a total of five galleries of which only three are operational. Gallery I depicts the early incidences and the events that led to the war. Painting of the elusive Fakir who initiated the seeds of the war in the Indian soldiers is seen distributing rotis to his disciples. Other paintings such as the soldiers refusing to use the greased cartridges, court martial that was initiated against the 85 soldiers for refusing to use the cartridges are on display.

Gallery II has displayed the paintings of other events during the war such as the breaking down of the Baghpat Bridge, Rani Lakshmi Bai, Lucknow Bagh, Sati Choura Ghat. Collectibles and items such as the swords, guns cartridges are on display at the museum. Gallery III consists of coins, inscriptions from the excavated sites near Meerut speak about the ancient civilization that Meerut was a part of. A reference library containing the books pertaining to the freedom struggle is also a part of this museum.
The Museum is open between 10 am to 5 pm everyday and remains closed on Monday and Government holidays.