The city of Meerut is associated with a number of sporting events owing to great interest shown by the people here. The city is also famed for the historical events, thereby, playing a tremendous role in the history of the country. The First War of Indian Independence of 1857 is known to have originated in Meerut, where in the Indian soldiers marched towards Delhi uttering "Dilli Chalo" in the historic "Dilli Chalo Andolan", that took place on May 9, 1857. This day has gone down in the history of the city, as the day 9th May is declared a holiday in Meerut. To mark the occasion, a half Marathon is held called as Meerut Kranti Half Marathon. Hence, this event has a great historical significance as well as it commemorates the war heroes of the First War of Indian Independence of 1857. 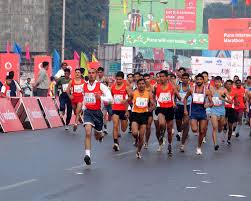 Meerut Kranthi Marathon is held in Meerut on the 9th day of May every year. This event is organized by the Kisan Log Foundation, a non-profit organization that works with the poor and needy people of the rural community of Uttar Pradesh. The Marathon starts and ends at the Victoria Park and has five categories based on the distance. This includes 21 kilometers, 10 kilometers and five kilometers apart from short distance walk and run. The route of the race is as follows: Victoria Park - Surajkund - Hapur - Shastri Nagar - CCS University - Saket - Commisionary - Meerut College - Police Line and back to Victoria Park. The fees for participation in the various events ranges between Rs. 200 to Rs. 500.

Almost 2,000 participants from all over the state participate in the various races that are held during this marathon. This event has in recent years emerged to be one of the most sought after marathon where amateur runners as well as professional athletes participate with great enthusiasm and sporting spirit.

This event is followed by a musical night held at either at the Victoria Park or the Shaheed Smarak premises that commemorates the war heroes. The runners are felicitated during this event and prizes to the top ten runners from various categories are given away. Prizes include medal, certificate, prize money and momentum.

The registration for the event generally takes place during the months of March and April. The details of the Meerut Kranthi Half Marathon are:

Explore more about Sports in Meerut