Meerut Cantonment is the earliest and the largest of the Cantonment established during the British Raj in India. Its establishment dates back to as early as 1803. The Cantonment of Meerut has a lot of historical significance as events such as the Dilli Chalo Andolan and the beginning of the First War of Indian Independence saw its initiation here at the Cantonment. In present era, the Cantonment houses some of the important structures that bear memories of the bygone era. To name a few are the Kali Paltan Temple, the Shaheed Smarak, Meerut Museum, etc. The Cantonment area covers nearly 3,568 hectares of land out of which only 150 hectares is under civil area, surrounded by Pallavapuram, Ganganagar and Sainik Vihar. 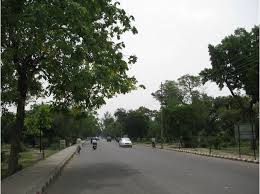 Meerut Cantonment was established in 1803 by the British East India Company and is the oldest and the second largest in India. Few native regiments were stationed here during the period between 1803 and 1806 when the construction took place here. The Cantonment here is associated with the Freedom Struggle Movement when the seeds of the First War of Independence were sown here. The Indian soldiers were given Enfield Cartridges that were greased with the pig fat or bovine. They had to bite into the cover of the cartridges before using them. This hurt the sentiments of both the Muslims and Hindus that led to the boycott of Indian soldiers to Delhi called as "Dilli Chalo Andolan". This being the immediate cause for the uprising that soon followed in Meerut and spread to the districts of Meerut.

Places of Interest in Meerut Cantonment

This is a site of memorial stones of the soldiers who were killed in the War of Indian Independence of 1857. Also called as Shaheed Smarak, this pillar is adorned by the Ashoka Emblem on its top most column. It is a 30-meter-marble structure that was built to commemorate the war heroes. Portraits of some of the celebrated war heroes such as Tantia Tope, Nana Sahib, etc. have been put up on the walls of this structure.

Also called as the Kali Paltan Mandir, this temple played an important role during the Freedom Struggle of 1857. This place is situated close to the cantonment area where the Indian soldiers were stationed. The Indians in those times were often referred to as Kali Paltan. They found a safe place in the temple premises, to escape and plan their meetings without any interference from the British. The presiding deity here is Lord Shiva and the Shivalinga in this temple is believed to have emerged on its own.

This Museum is located in the compound of the Shaheed Smarak. This museum has a wide collection of various art, artifacts, memoirs related to the different phases of history more particularly the First War of Independence. The museum has five galleries which has a good collection of coins, paintings, postal stamps etc.

Gandhi Park is a large public garden located in Cantonment, where people come here for relaxation and pleasure. Its verdant surroundings and good upkeep of the park makes it popular among all age groups. This garden was established in the pre-Independence times, which probably explains the reason for its being called popularly as the company garden.

Established in 1819, it was primarily meant for the British officers who served at various capacities during those times. It is one of the largest church as it has a seating capacity of over 10,000 people. It is known for its unique architecture, which is an example of Gothic style. In present times this church is managed by the Diocese of Meerut.