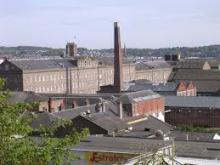 Meerut is located close to the capital city of New Delhi. The city is known for its rising economy, both agricultural and industrial, transportation and tourism and also for its significant contribution to the history and culture of India. Owing to its strategic location, availability of raw materials, an otherwise agricultural town saw a surge of industries in the recent decades. A number of factors contributed for the rise in industries. Chief among them being the agglomeration of Meerut into the National Capital Region in the 1990s which contributed for the change in the very economic fabric of the city. The surge in the number of industrial units and the diverse segment of manufacturing units have contributed in making Meerut one of the largest industrial hubs and fastest growing cities of the world. From the conventional businesses such as scissors, musical instruments, the city is now the one of the largest manufacturer of gold jewellery, sports goods, sugar and agro-based industry.

The Meerut cluster accounts for the largest suppliers and manufacturers of scissors in the country, some having a history of more than 300 years. In total there are more than 250 units employing nearly 70,000 people. Most of the Meerut scissors are manufactured from recycled metal scrap and automobile parts, that are chiefly used for garment makers. The price range of these scissors is Rs. 20 to Rs. 500. Owing to its distinct nature and quality, Meerut scissors qualified for geographical indications in 2013. Most of the scissor-manufacturing units are located at Ghantaghar, Peeramal Market, Khairnagar and also the nearby villages of Mawana, Parikshitgarh etc.

Meerut lies in the trans Yamua belt, and hence, is agriculturally very prosperous. This region produces nearly 5% of the total national output of sugar. Given the fact that Meerut is an agricultural hub, a number of sugar industries are located in Meerut region, some that have been established as early as 1932. To name a few are Balrampur Chini, Mawana sugars, Daurala sugar, Dwarakish Sugar, Doab Sugar Mills are just to name a few. Meerut is an agricultural hub that produces nearly 26-30 tonnes of sugar annually. A number of initiatives are taken by the government to optimize the capacity and to better the logistics and availability of raw materials to the sugar industries.

Apart from the above-mentioned industries, Meerut is a home for a number of other industries as well. Handloom industry, which primarily manufactures blankets and mats, paper industry, handicraft industry and a whole host of agro industries have their presence in Meerut, supplying their finished goods to the domestic as well as international markets.

Explore more about Business in Meerut