History of Meerut is deep rooted in the history of India. The strategic location of this area has been a witness to innumerable historical events dating back to as early as eighth to ninth century B.C. The relics from ancient history and times of Mahabharata have been unearthed at Hastinapur that is located just 37 km from Meerut. Meerut was under the rule of Ashokan empire and the subsequent Mauryan rule. Other historic towns such as Sardhana, Haridwar, Gurmukhteshwar are within a radius of 100 km from Meerut. During the British rule Meerut played a pivotal role in its struggle for Independence when the early beginnings of the First War of Indian Independence happened at Meerut Cantonment. 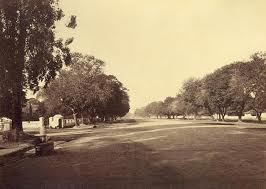 The etymology of the word Meerut was probably derived out of Maya rashtra that belonged to Mandodari's (Ravana’s wife) father, Mayasura. Meerut is known as the Gateway to Hastinapur- the quintessential site of the epic Mahabharata. Relics and remains dating back to this period go to prove that this region was the capital of the Kauravas and Pandavas. Since Meerut is between Indraprastha (present day Delhi) and Hastinapur, there are a number of sites dating back to the ages of Ramayana, as well. To name a few are Gangol and Balani the villages located near Meerut, the Shiva Temple in the city, etc.

Meerut was a stronghold of the Mauryan Empire from 322 BC to 185 BC. The Buddhist relics close to the Jama Masjid date back to the times of Ashokan period. The Ashoka pillar at Ferozshah Kotla in Delhi was unearthed in Meerut and was later installed here.

During the medieval period, Meerut was by and large ruled by the Delhi and the raja of Bulandshahr. In 1018, Meerut came under the rule of Mahumud Ghazni, during whose rule the famous Jama Masjid in Meerut was built. In 1192, Meerut was attacked by Qutub-ud-din Aibak. In 1398, Meerut came under the attack of Timur, the Turkish-Mongol ruler. His attack created a lot of devastation and havoc in North India, who also was known to have brutally massacred more than 1,00,000 local people from Meerut and surrounding areas. For a brief period, Meerut was under the local Afghan ruler.

Meerut came under the rule of Delhi rulers during the early modern period. Meerut during this period witnessed tranquility and growth in the economy. During the rule of Akbar between -1556 to 1605, coins were being minted as well as the roads were being laid. The reign of Aurangzeb marked the end of Mughal occupation over Meerut, which then came under the local chieftains such as Saiyyads, Jats and Gurjars. The Jats had a stronghold over Meerut till the end of 18th Century. Parts of the Meerut district came under the rule of Walter Reinhardt, the English ruler who ruled Sardhana during those times. The British by then had established their hold in India, and the British had established the Cantonment in Meerut in 1803. Many developmental plans such as establishment of schools for regimental children, parks and churches, bungalows of officers were carried out in Meerut that gave them a foothold over the city. 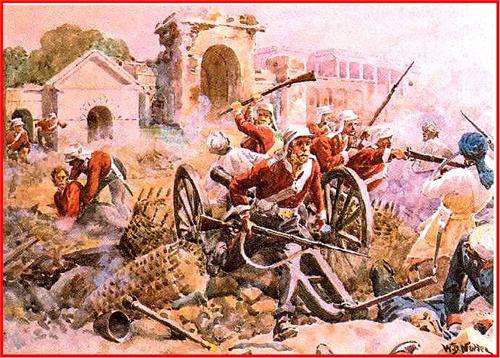 Meerut is popularly associated with the First War of Indian Independence. The Sepoy Mutiny as it is popularly called, saw its beginnings here at Meerut Cantonment, that was established by the British way back in 1803.

After a series of diabolical laws, oppressive rules, the Indians were waiting for an opportunity to revolt against the British. The Indian soldiers or the Sepoy were called Kali Paltan by the British. During this time, the British had introduced the new kind of rifle called the Enfield Rifles of 1853. Before loading the rifles the soldiers had to bite the cartridges open to release the powder. The paper cartridges were tightly bound and pre-greased using either tallow that was derived out of beef or with lard that was derived out of pork. This hurt the religious sentiments of both the Hindu and Muslim soldiers. To top it, they were often taunted that they would their religious status if they would do so. The use of these cartridges caused a lot of upheaval among the soldiers all over India.

One of the primary causes for the outbreak of the war was by the revolt by the Indian soldiers called Sepoy at Meerut. During this time, the British had introduced the use of Enfield Bombs, which were typically paper cartridges pre-greased with lard or beef fat. During one of the sessions of fire drills, the Indian soldiers refused to bite the cartridges that were greased with fat. This led to their imprisonment and court martial of few others. Angered by the action, after few days, the Indian soldiers attacked the British officers who were off duty. Kotwal Dhan Singh Gurjar, the leader of Meerut Kranti movement opened the gates of the jail and set nearly 900 prisoners free, and also killed 50 of the British officers and their families. This marked the nationwide stir and the famous " Dilli Chalo" movement was started with the soldiers in large numbers marching towards Delhi.

The controversial Meerut Conspiracy case was made against Trade Unionists who organized the Railway strike in 1929. Among the thirty two accused it also included three Englishmen. The case was decided in 1933 and sentenced some of the accused with life imprisonment, or rigorous punishment. The appellant case, however, reduced the sentence of each of the accused and some were let free.

After Independence, a lot of developmental activities have taken place and much has been done for the betterment of infrastructure of this region as a whole. Meerut assumed the eponymous name of the District that it is named after. There has been series of religious riots and attacks in the past that includes the Hindu Muslim riots in 1982, Hindu Sikh Riots in 1984 and also the Hashimpura massacre that took place in 1987.