"Ghantaghar" as the name literally means a clock house or clock tower. The clock houses served to be a distinct landmark to a town or city and was generally established at the most popular area. During the British rule in India, several ghantaghars were built in different towns and cities, generally in the center of the town. In India, such clock towers have been built in Dehradun, Meerut, Indore, Gwalior etc., among various other towns and cities mostly in North India. 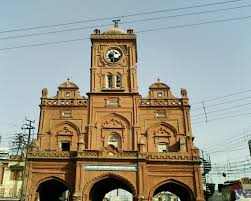 The Ghantaghar in Meerut is a magnificent structure that was built by the British in 1914. The tower on which this clock is erected originally used to be a gate called as Kamboh Darwaza. The chowk named after this tower is the Ghantaghar Chowk and the place is called as Zero Mile Point. This gate has later been named as Subhash Chandra Dwar. Further ahead to this place is Modinagar and the road that leads to the railway station. The clock here was specially imported from Germany, and was later shifted to Allahabad High Court. However, it was only a few years back that this tower was restored to its original place once again.

The Ghantaghar serves as a gate from the market area to the railway station. The area here is dotted with shops dealing with electronic goods, clothes and hardware shops. Further ahead to this chowk is the Lala Bazaar that sells toys and trinkets, stationery and household items.