The metropolitan city of Meerut is an industrial hub as much as agricultural and allied activity. Meerut is 70 kilometers North West from New Delhi and about 453 kilometers from Lucknow, the state capital of Uttar Pradesh. The strategic location of this region on the fertile plains of Rivers Ganga and Hindon, a tributary of Yamuna, is conducive for agriculture and allied activities. The state is spread across 2590 square kilometers and is situated at 77 degrees and 78º longitude East and 28º 54 and 29º 15’latitude North. Meerut city is divided into Mawana, Sardhana and Meerut divisions. 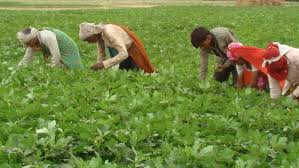 The bordering districts of Meerut are Muzzafarnagar on the north, Ghaziabad, Gautam Budh Nagar and Bulandshahr on the South, Jyotibaphule Nagar and Bijnor District in the East and Baghpat District on the West. The whole region of Meerut enjoys physical and climatic conditions, coupled with adequate rainfall - the reasons that have fostered agricultural development here. As a prominent conurbation of New Delhi, the city became part of the National Capital Region (NCR) that has fostered the development of this region.

Meerut is situated on the vast plains that are bounded by River Ganges on the east and River Hindon on the West. The average rainfall here is about 586 mm and monsoons begin by the end of June and lasts till the end of September. The alluvial soil grains deposited from both the rivers is what makes this whole region most suitable for agriculture. 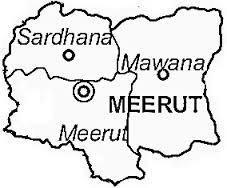 Due to rapid industrialization and development in the city, there has been a demographic shift of people from nearby villages and towns to Meerut city. As per the 2011 census the population of Meerut stood at 3.4 million. Out of the total 34,47,405 people, 18,29,192 was the male population and the rest 16,18,213 was female population. As per the previous recorded population in 2001, there has been a rise of 15.92% in a span of 10 years. Meerut ranks the 26th most populated city in India. Owing to the high developmental activities in this region the population density of Meerut is relatively very high. The population density of Meerut is 1347 people/square km. This is the sixth highest in the country and second highest in the NCR Region.

The climate of Meerut is characterized by hot summers and cold winters that are typical for the subtropical climate. The summer months see a maximum of 45 degree temperature while winter chills can bring down the temperature to as low as 2 degree Celsius. The monsoon season begins from the end of June and lasts till the end of September. The months of October to December are relatively pleasant, and the later months of winter are relatively dry days.

The soil that constitutes the plains of the region of Meerut is the Aluvial Soil type. The grainy soil deposits from rivers on which Meerut is situated - Ganges and Yamuna is what constitutes for the fertile Alluvial soil.

Meerut has attained prosperity in agricultural sector thanks to the rich natural vegetation of the area. The District of Meerut grows cash crops as well as food grains such as wheat, bajra, maize, barley, potato and pulses. A number of sugar industries are situated here owing to the fact that large tracts of land grow sugarcane in this region. Besides, a wide variety of fruits and vegetables also grow in this region. Invariably, there is a rise in agriculture dependent activities such as animal husbandry, dairy farming, and manufacture of agro-based products, etc. It can well be concluded that agriculture is the pivot around which most of the development in this region has taken place.

Facts and Figures about Meerut