Fairs and Festivals in Meerut 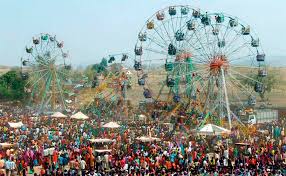 The Nauchandi mela is a month-long-festival that is held after the second Sunday after Holi every year. As per the legends, Mandodari, wife of Ravana was born to the family of demons in Meerut. Her faith in Goddess Chandi was well known in whose honor the Chandi Devi Temple was built. The Nauchandi fair takes place on the grounds of the Chandi Devi temple. The fair was, however, believed to have started in 1672 mainly for cattle traders. However, in the course of time, this festival is observed as a month long festivity in honor of Goddess Chandi. Handicraft stalls, food stalls, music etc. mark this event.

The Sardhana Christ Fair takes place during the first Sunday of November. A gathering of nearly six lakhs people from world over witness the feast that is held in honor of Mother Mary. An Indian style carnival and various other traditional celebrations are the main highlights of the event here. Food stalls and other exhibits, performances by artists take place during this fair.

This fair is organized by the Sardhana Municipal corporation after the Nauchandi festival generally in the month of June.

The Garh Ganga Mela is one of the most popular fairs that is held in Garhmukhteshwar during the month of November every year. The holy dip at the Ganges followed by religious rituals mark this event. An estimated ten lakh of people get together during this mela that takes place during the Dusherra festival. Gadho ka mela is a part of this fair where an estimated 50,000 donkeys are traded during this day.

The Ganga Snan Mela is held annually at Mawana. The place is 10 kilometers away from the flow of River Ganga where the mela mukhdumpur is held that attracts a congregation of over two lakh devotees for thie holy dip at the Ganges.

This Mela is held at Bhagpat situated 20 kilometers from Meerut. This fair is organized within the Valmiki Ashram, which was known to be the birth place of Luv and Kush, during the time when Sita stayed here during her exile. This place is on the banks of Hindon river, and during the fair, people in large numbers gather to honor Rishi Valmiki.

Besides the above named fairs and festivals, Meerut is a home to a number of other events, fairs and melas which have been in practice for generations together. Some of the other melas that are held in and around Meerut are the Chaddiyon ka mela, Ramlila mela, Ganga ji ki mela among others.

Explore more about Culture in Meerut