Churches in Meerut are known for their architectural marvel as well as a rich history. Since this region was a prominent British settlement a number of churches here date back to times as early as mid 18th and early 19th century. St. John's Church in Meerut is one of the oldest churches in north India too and like most of the churches of those times, it served the military garrison stationed at Meerut. Other churches in and around this region include the Basilica of our Lady's Graces in Sardhana and also the churches run by the Diocese of Meerut that have their presence across the district. 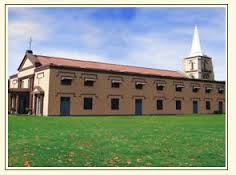 Church St. John is oldest in north India that was founded in 1819 and is presently under the Diocese of Agra. Built in the classical style, it is famed for its Gothic architecture on the similar lines of architecture as that of St. Martin in the Field located at Trafalgar Square in London. In today's day, St. John's School is run by the parish of this church. Read More

This church is also among the oldest churches that was built during the period of the British Raj. Rev. Hoernle and his wife Emily Hoernle, who served as missionaries during the 19th century, built this church in 1868. This church is an imposing structure and is known for its magnificent architecture and interiors particularly the big altar.

The Methodist Church was founded by John Wesley, an Anglican priest. In the latter half of the 19th century, two women priests came and took over the evangelistic activities of the church thereby baptizing several hundreds of people from the nearby villages and towns into the Methodist community. This church is located in the City Lines Area of the city.

This church was built by Begum Sumru of Sardhana in 1834 and was frequented by the British soldiers, who normally came fully armed to the church. Its unique architecture in a verdant surroundings, makes it popular among the people. It is presently under the control of the Diocese of Meerut.

This is a relatively new church that was built in 1941 in commemoration of the members of the Royal Army Corps. The city is located on the Roorkee Road at Meerut Cantonment.

Basilica of our Lady's Graces

This church is located in Sardhana, the roots of which can be traced back to 1809, when the church was built by Begum Sombre, who was ruling Sardhana, and had converted herself to Christianity in the year 1781. Known for its unique architecture, the church is marked by high vaulted walls, and a large altar. This church is dedicated to Virgin Mary.

Besides this there are a number of churches that have their presence in Meerut, most of which come under the administration of Diocese of Meerut.


Churches of the Diocese of Meerut