Meerut is the administrative headquarters of Meerut district, located 70 kms from the national capital New Delhi. The district is spread over three tehsils or taluks, which are further divided into 12 wards, comprising a total municipal area of 141.82 square km. Its proximity to New Delhi, as an agglomeration to the National Capital Region (NCR) and being a popular seat of education, Meerut has witnessed tremendous activity and influx of people in recent times. The humongous task of managing the civic administration of the city is carried out by Meerut Municipal Council and other arms of administration such as District Courts, Meerut Police, Meerut Developmental Authority etc. These organizations work individually, severally and hand in hand in the smooth functioning of various facets of city administration. 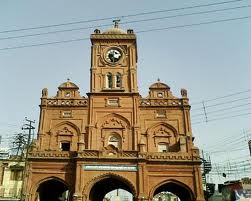 Meerut Nagar Nigam is established under the provisions of the Uttar Pradesh Nagar Nigam Act, 1959. It is classified as Urban Local Body or Nagar Nigam as promulgated under the 74th Amendment of the Constitution. It is in-charge of maintaining the civic, sanitation conditions as well as look after the administration of the city. Maintenance of roads and public places, provide efficient sanitation facilities, street lighting, maintenance of parks and gardens are some of the functions of the Nagar Nigam. The funds for such maintenance activities come by way of stamp duty on lease and license of shops and residential areas, fees from the issuance of birth and death certificates etc.

Meerut Nagar Nigam is divided into 80 wards with a population of 1,309,023 and is headed by the Mayor, who is elected directly by the people. The functions are divided among six departments which include PWD, Health, Tax, Advertisement, License and Street Light; each carrying out its respective functions and duties.

The infrastructure and developmental activities in Meerut comes under the purview of the Meerut Development Authority (MDA). The MDA was formed in 1976 and is governed by a whole host of laws including The U.P. Ownership of Flats Act, The Uttar Pradesh Parks, Playgrounds and Open Spaces (Preservation and Regulation) Act, The U.P. Special Area Development Authorities Act, etc. In short it has been instrumental in the development of plots, housing and commercial areas, beautification and the planning of the city etc.

The District Court is located at Lalkurti Bazaar and has jurisdiction over the entire Meerut District. A total of 57 sitting judges preside over matters pertaining to civil, criminal, family, labor etc. in nature. The District Court has original jurisdiction as well as appellate jurisdiction based on the territorial and pecuniary limits of the matter. An Administrative judge is appointed by the High Court of Allahabad to overlook matters pertaining to the Courts in the District.