Meerut is an ancient city of Uttar Pradesh. Historically and archaeologically Meerut has proved to be of immense importance. There are several theories on how Meerut got its name. Others say that it derived this name from Mahipal, a king of Delhi.

Archaeological excavations revealed the remains of ancient Hastinapur and an ancient Harrapan settlement at Alamgir in Meerut, connecting its history to the Indus Valley Civilization era.

Many threads of Hindu mythology have been weaved through this city. Legend has it that it was founded by Mayasura, father of Mandodari (Ravana's wife). It is said that, this is where King Dashrath had accidentally shot Shravan Kumar begetting the curse of the old and blind parents. Therefore, Meerut is supposed to be the grounds from where the entire epic Ramayana grew.

A Brief History of Meerut

Meerut is a city, as old as our civilization, as suggested by the Harappan settlement found at Alamgirpur. This settlement is the eastern-most point of the Indus Valley Civilization. Another excavation at Vidur-Tila revealed ancient remains of Hastinapur, suggesting that Meerut flourished in the period of Mahabharata. That Meerut had been a centre for nurturing Buddhism during the Mauryan Empire is evident from the presence of remains of Buddhist structures within the city. The Ashoka Pillar, which now proudly stand at the Delhi ridge, was carried there from Meerut by Firoz Shah.

Some say it was originally known as Mahi Rastra, after the Architect Mahi who built the city under consignment from Yudhisthira. Mahi is known to have built the Andar Kot fortress. When Saiyid Salar Mausad invaded India, he captured Meerut. In the eleventh century, a part of Meerut was ruled by Hardatta of Bulandshahr. During this period, a fort was built, which according to historians is one of India’s strongest and fortified structure, this fort was later used as a mint for copper coins by Akbar.
Meerut has also been one of the major sites from where the Revolt of 1857 arose. The winds of Meerut were the first to hear the slogan "Dilli Chalo”. 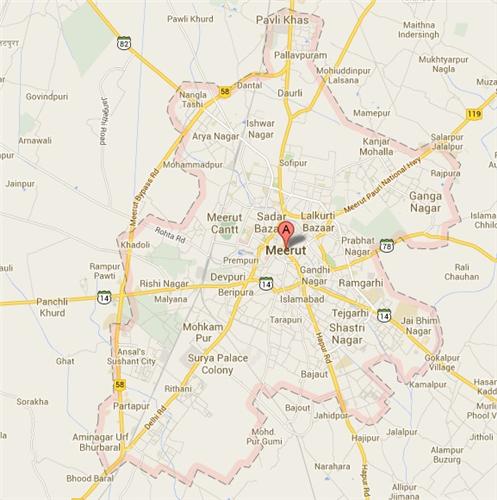 Around 70 km to the north-east of Delhi and 453 km to the northwest of Lucknow, the capital city of Uttar Pradesh, Meerut lies in the fertile plains between the Ganges and Yamuna.

Meerut has typically hot humid summers starting from April and extending to June with temperature going up to around 430C. Monsoons follow the summer and stay up to mid September. The winters are chilly. The monsoon arrives in late June and continues till the middle of September.


Amidst the hustling daily life of this city, images of ancient culture come alive. There is a lot to see in Meerut. Any street of Meerut is like an amazing gallery with windows which let you go back in time to any age, may it be the ancient, medieval and contemporary. Various places in Meerut open up a page of history, one from all ages that has been tucked away in our minds. Every place in Meerut has a story behind it, and visitors find themselves drawn into this irresistible urge to see more.
Major tourist attractions’s in Meerut are:

Since long, the city of Meerut has had a reputation of being a hub for products associated with smelting, engineering and agriculture. Meerut provides rest of India with agricultural tools and equipments. The biggest manufacturer in this field is Hans engineering works. Apart from the above, Meerut is India’s biggest producer of musical instruments. Sports products are exported from Meerut. Meerut has established itself as an enormous supplier in these two fields.

Food and Shopping in Meerut

The sweet shops of Meerut are very famous. Indian savouries and sweets like revri, gajak, etc from Meerut are famous nation-wide. Gokul Revri Shop at the Budhana Gate space is probably the most well known shop for sesame based sweets.

In recent years, Meerut has modernized. Therefore, one can find lots of shopping plaza, market complexes and malls all around. In spite of these, the old bazaars are still present and it is real fun shopping around them.

How to Reach Meerut

The nearest airport is Delhi International Airport. Meerut is well connected by road to cities like Delhi (70 km), Agra (267 km), Kanpur (405 km), Varanasi (725 km), and Chandigarh (250 km). The Uttar Pradesh State Road Transport runs buses on most of these routes. Meerut can also be reached by train. The Meerut Cantonment is the most suitably located railway station with regular trains connecting to other parts of the country,